When someone dies without leaving a Will, they are said to have died intestate. There are strict rules governing who will inherit their estate, known as the Rules of Intestacy.

Dealing with the estate of someone who has not left a Will can be more complex and time-consuming than normal. There can also be an increased risk of disputes arising.

Who inherits an intestate estate?

The Rules of Intestacy (the Rules) set out who is entitled to inherit an intestate estate in strict order of preference. By way of example, if someone is married with children then their spouse is entitled to the first £270,000 of the estate, plus all of the deceased’s personal possessions.

The remaining half of the estate will be split into two, with one half going to the spouse and the remaining half shared equally between the deceased’s children. Under the Rules, cohabiting partners and stepchildren will not receive anything.

An administrator will generally need to apply to the Probate Registry for a Grant of Letters of Administration giving them the authority to deal with the winding up of the estate.

Those who will inherit under the Rules are entitled to apply to become the estate administrator, in the same order of priority. If someone does not want to take on the role, which can be time-consuming and sometimes complex, then the next person can step up.

Disadvantages of intestacy Difficulties can arise in the winding up of the estate of someone who died without a Will. If more than one person is entitled to dealing with the administration, there may be a dispute over who takes on the role.

It may be harder for an administrator who has not been prepared for the role to identify all of the deceased’s assets, to include gifts of cash made within the last seven years.

They will also be responsible for discharging all of the deceased’s debts and other liabilities.

The administrator needs to ensure that they have included all of the beneficiaries who are entitled to inherit. If the deceased did not have close family or had a number of children whose whereabouts are unknown, this may be difficult.

The administrator could be held personally liable for any mistakes that they make that give rise to a loss, even if the error was genuine.

Where someone close to the deceased, such as a cohabiting partner, or someone who relied on the deceased for financial support does not receive anything after their death, they may decide to make a legal claim against the estate. The administrator will be required to defend this claim, which could be expensive and time-consuming. Disputes could also arise among family members who believe that the deceased would have wanted them to receive more than they are entitled to under the Rules.

The best way to avoid difficulties is to ensure that a valid Will is in place. If your relative has died without leaving a Will, it is recommended that you seek legal advice in dealing with the winding up of their estate to protect your position.

If you would like to speak to one of our expert Wills and probate lawyers, ring us on 0800 781 6658 or email us at enquiries@estplan.co.uk. 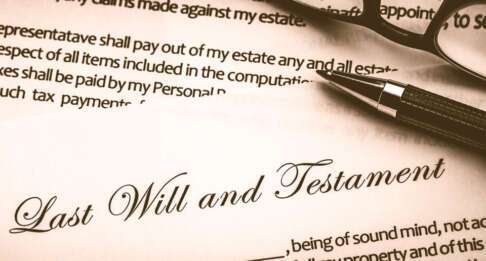 Half of Wills in the UK are out of date

What happens if a beneficiary is bankrupt?